On June 30 June, The MoU for the construction of 1.79 km of ILD was signed between the community of Piswhari, Minimarg village, Economic Transformation Initiative (ETI) and Water Management Directorate (WMD) in the presence of 100% community representatives. More than 65 community members from the village participated in the event. The said irrigation and land development (ILD) at Pishwari, Astore total estimated Rs.7.21 million that will executed within the 05 months. The irrigation and land development scheme of Pieshwari,Minimarg will bring 125 acres of barren and existing land under cultivation, advancing the irrigated land for 65 households including landless and poor.

Before, the formal signing of MoUs, the social mobilization processes along with, all the terms and conditions were disclosed and reiterated by Regional Program Coordinator and the communities were asked to share their concerns, if any. Communities were found with complete commitment, and enthusiastic to initiate the project.  It is expected that the community will be able to generate agriculture income through cultivation of cash crops once the barren land transforms into a cultivated land. The community will create an endowment fund through the payback mechanisms, within the three cropping seasons. This endowment fund will be used for repair and maintenance of water channel as well it can be reinvested in socioeconomic development of village.

Subsequently, with same community, MoU for construction of 4.116 km of Farm to Market Road (FMR) was signed with SMT of Pieshwari, Minimarg in the presence of community representatives. Around 65 community representatives from village participated in the event. The said FMR will link Pieshwari,Minimarg with main Minimarg valley road and will help greatly in transportation of farm produce such as potato, Barley and Peas etc to the market. The total estimated cost of scheme is PKR 18.653 million that will be implemented over 5 month’s period – by end of November, 2018.  As per ETI’s model the projects will be implemented through community which will be monitored by SMT. ETI’s technical staff will ensure quality and adherence to specification as per approved design and cost estimation sanctioned in the TS document. Community appreciated ETI’s effort of ETI linking Pieshwari,Minimarg through FMR, which will help community to promote their products from the newly developing land as well. The community reiterated to implement the projects as per the specification and manage to completed before the given time lines. 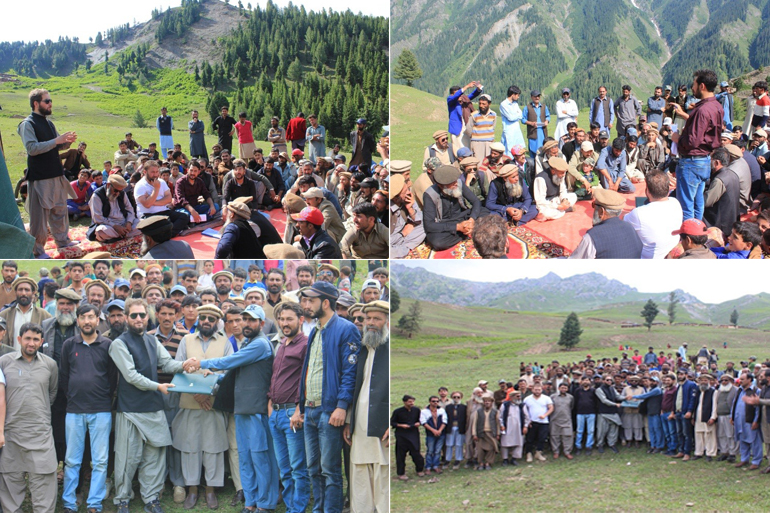