ETI Baltistan Signs Five MoUs in the month of June 2019

ETI Baltistan Signs Five MoUs in the month of June 2019

Economic Transformation Initiative Government of Gilgit-Baltistan entered into partnerships with various communities to implement agriculture infrastructure projects in Ghanche District. During the month of June-2019, a total of five (05) Memorandum of understandings (MoUs) were signed with representative committees- Scheme Management Teams (SMTs) for the implementation of projects. The agreement was signed for Khaplu Broq Irrigation and Land Development (ILD), Surmu Broq (ILD), Hushey Farm to Market Road (FMR) Phase-II, Surmu FMR Phase-II, and an MoU signed for a Bridge at Thalay Broq. These projects will bring 2507 Acres of barren land under cultivation, and construction of 4.6 km FMRs, and 3.1-meter bridge, which will improve links of previously disconnected farms with the markets.

The details of Agreements signed for ILD:

Khaplu Broq, ILD: The scheme will bring 1830 acres of additional barren land under cultivation benefiting over 1100 households. With an estimated cost of 84.39 Million PKR, a channel of 12.9km length will be constructed in 18 months period.

The details of Agreements signed for FMR & Bridge:

Hushey Phase-II, FMR: Construction of 0.76 km FMR would benefit 125 households. The estimated construction cost of the FMR is 3.4 Million PKR.

Surmu Broq Phase-II, FMR: Construction of 3.84 km will provide access to the farming land at Surmu Broq. The estimated cost of the scheme is 10.94 Million PKR.

Kunais/Harikun, FMR: Total length of FMR is the 7.62km length, the estimated cost is 28.6 Million PKR. A total of 149 households would be taking benefit of the scheme.

Thalay Broq, Bridge: A wooden bridge of 40 RFT, with the estimated cost of 3.1 Million PKR, will be constructed which will benefit around 900 households.

During the MoU signing ceremony held at Khaplu, Ghanche, Mr. Kamal Khan Deputy Commissioner (DC) Ghanche graced the event as Chief Guest. Mr. Haji Muhammad Iqbal ex- MLA GBLA, departmental heads, community notables and a large number of beneficiary community members attended the event. In his address, Mr. Kamal expressed his greater satisfaction over various interventions carried out to impact rural poverty and enhancing agriculture income. He urged communities to take maximum benefit from such projects of Government of Gilgit-Baltistan and asked SMT members to implement the project according to its design and ensure quality. Mr. Haji Muhammad Iqbal, in his speech, appreciated the role

of ETI GB in alleviating the poverty of the district. He considered the role of ETI GB as a major contributor in improving the rural economy of the area. He extended his gratitude to the Government of Gilgit-Baltistan and IFAD for the project that aimed at addressing land holding issues of the growing population of the region.

Mr. Barkat Ali Regional Program Coordinator, Baltistan, expressed appreciation to District Administration, Line Departments and other Government institutions who played a supportive role in making projects successful and enabling project and its team in achieving targets. He appreciated the effective role of communities in the implementation of projects. He requested SMTs to follow prescribed project management and implementation mechanisms and assured that his team will be available to extend all technical and financial support to the communities. 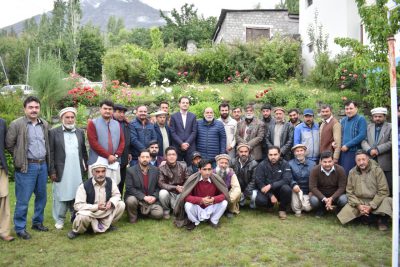 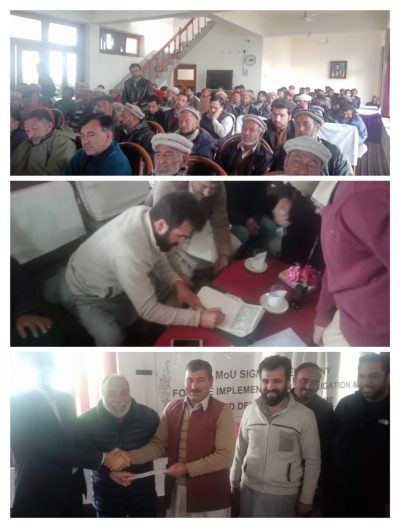 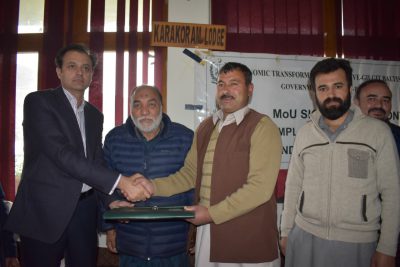 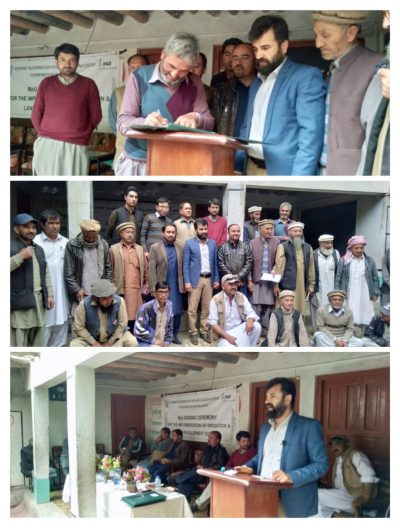 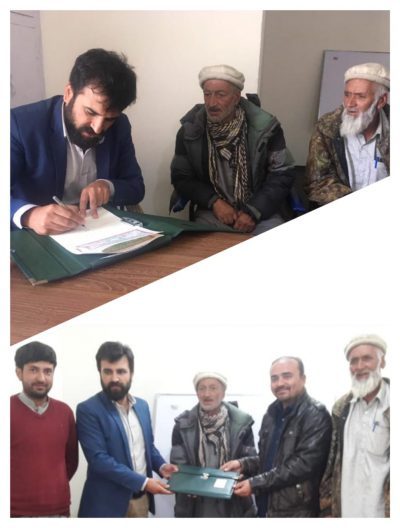